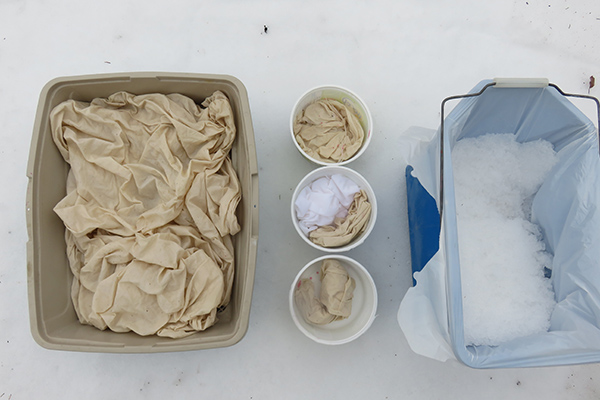 With the snow fast disappearing, I decided that I’d better get in another session of snow dyeing before I lost the chance for the season. I had intended to get into the city to pick up some more supplies but didn’t get the chance so I had to work with what I had around because the weather forecast was calling for more rain. I decided to experiment with what I had around the house. That included some dye that had been around for a few months and might have lost its potency. My dye supply also included some previously mixed woad, which I wasn’t sure would be effective with snow.

I had some mercerised cotton and some unbleached cotton ready to go for dyeing. It was already prewashed and cut for samples. I soaked all the pieces in hot water with a cup of Borax for about 2 hours. Soda ash (Sodium carbonate) is recommended for pre-treating but I have read that Borax. Some places recommend adding extra salt to the solution. I have done this before and the dyes seem to set quite well, though I have found the colour was not as vibrant as with soda ash.

The next step was to cover the materials with snow. I used one large container with a grid rack and several smaller containers.  I left the containers in the basement overnight, which is cool but not freezing so snow melted slowly.  In the morning, I rinsed all the dye. 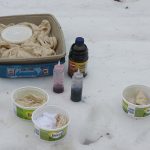 Getting ready in the yard 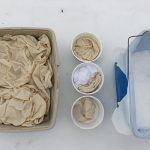 Materials sorted. Snow at the ready. 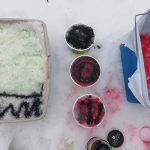 With snow and dye added

Here are some of the results after rinsing until the water ran clean and then washing with synthrapol. The colours are not as vibrant as some of my earlier attempts but I expected that might be the case and I am not unhappy with the results, especially as I need some more light values in my stash.  I also tried redyeing a couple of the pieces after they dried. 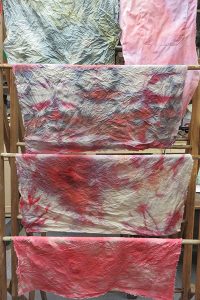 Some of the rinsed fabric drying on a rack.

I’ll add my latest fabric experiments to earlier dyeing studies and playing. I’m still deciding what to do with the collection. I waver between thinking perhaps a quilt with the collection and with mixing and matching in a variety of projects. 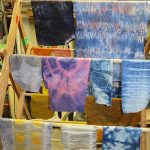 Some samples from a dye class I took at NSCCD 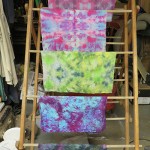 Remember if you are doing some dyeing to wash multiple times to be sure all dye is removed so it doesn’t run into other fabrics. I learned this the hard way but, fortunately, only on a small fun project.

Are you dying to dye?

If you want to do some dye experimentation, check these sites for both materials and training resources:

Or take a class locally or online.

In Halifax, there are textile dyeing or printing classes at:

Now that spring is, hopefully, here to stay, there might not be much opportunity for snow dyeing for a few months but there are lots of other ways to play with dye and print making. I think my next experimentation might be with ice dyeing. How about you?