Work in Progress: Passing the Torch 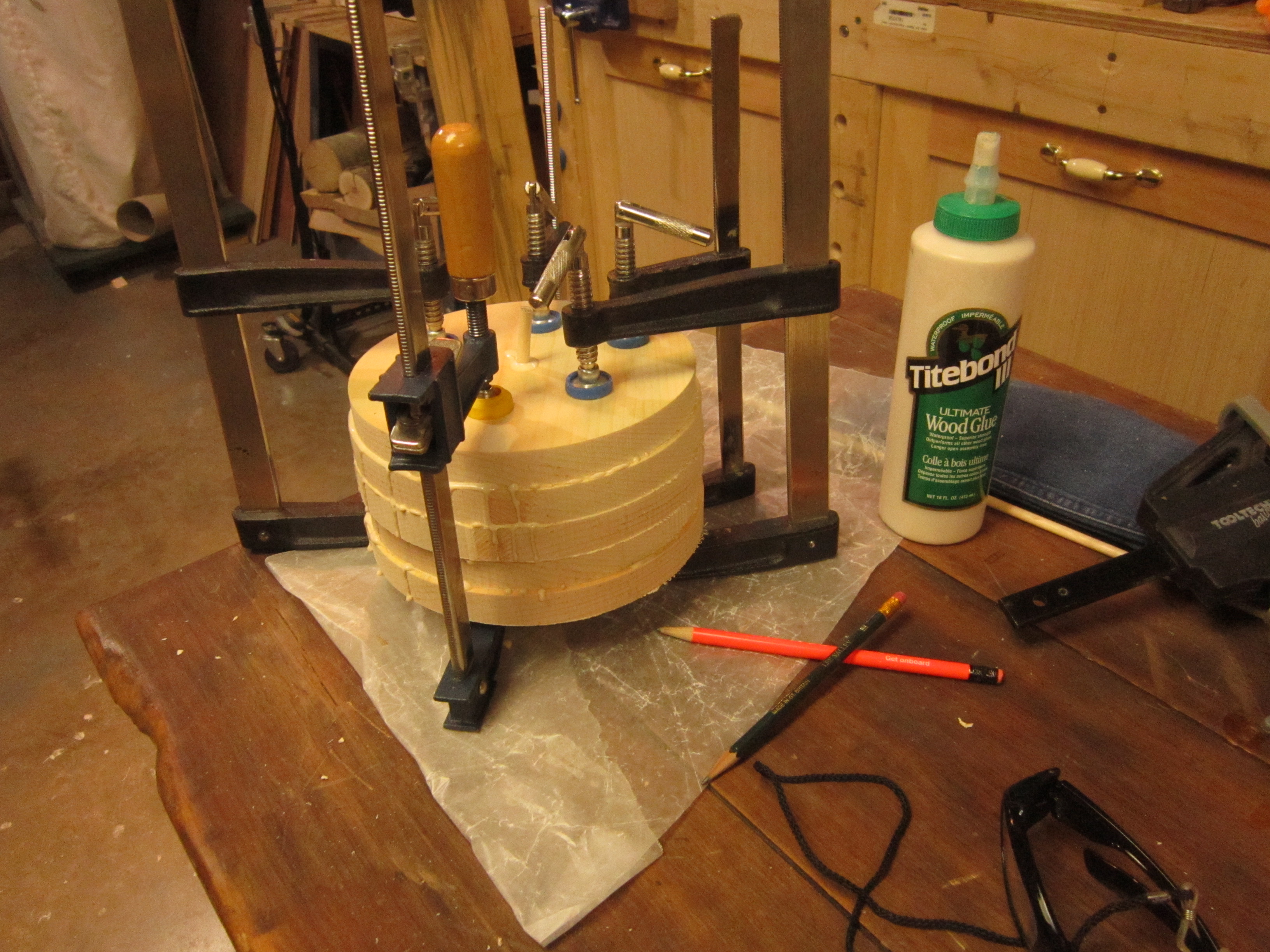 Warren Ervine may not look like a legend, but thirty years ago, he did something extraordinary – something that only a few Canadians will ever do. Warren ran a leg of the Olympic Torch relay for the Winter Olympics in Calgary in 1988. On February 20, during our country’s sesquicentennial birthday celebration he will relive that event at the annual Sackville Business Association Snow Days Parade with a replica of the torch that he held high in ’88. That’s where I came in…

Mr. Ervine, a retired professor of geology,  approached our local woodworking group, the Atlantic Woodworkers Association,  to see if he could talk someone into helping him recreate that olympic torch from nearly thirty years ago. Having discovered that private copies of original torches are rare and expensive, he brought a picture of the torch, blown up to full scale and an idea that it could be lathe-turned in a relatively affordable way with something like pine or spruce. He would paint the resulting item and insert a Tiki Torch into a hollow in the wooden vessel with low temperature torch fuel and a set of oil lamp wicks to create a nice looking – although fairly cool – flame. In his younger days he had the equipment to do the work himself but he has no shop now and needed to get this project done quickly if he was to don his olympic tracksuit and carry a flame for the event in Sackville this February. Although I thought other turners might do a better job, I was delighted to volunteer to help him out. 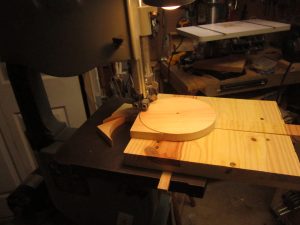 I had initially suggested we go with cedar, but Warren was certain that pine would be better for painting and detailing the body and lid. I picked up some dry 1″ x 8″ pine at our local Home Hardware store and got busy cutting it into seven and a half inch square blocks to become layers making up  a four-inch high base and two-inch high lid, slightly under the scale that he had provided, but hopefully close enough for his purposes. Once the blocks were cut, I used my circle-cutting bandsaw jig to get them round and close to final dimension.

Then came the glue-up, done in two sections – one for the base, the other for the lid. Lots of Titebond III, a strong waterproof glue that is a staple of my workshop, went into the glue-up and as you can see from the image at the top of this post, I didn’t try to clean  up the squeeze-out since I knew that none of the outside would be  visible once I roughed the mass to true. The glue was allowed to set overnight before I mounted it using a faceplate mount. This was the largest vessel I had ever tried to turn on my midi-lathe, a Craftex CX801 with a maximum 10″ swing over the bed. Needless to say there was a lot of vibration when the relatively unbalanced mass started to turn at high speed.

However, once the base was brought to round, it settled down nicely and I was able to try out my new Robert Sorby bowl turning gouges along with my very new Easy Start Tools from  Lee Valley. I’ve never made so much sawdust and shavings in so short a time in my life, but within a few hours I had the body and lid both turned and I was happy with the final result. I hollowed out the base with the gouges and cut an opening in the lid with a hole saw mounted in my drill press. 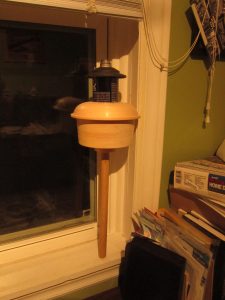 The final step was to add a torch handle – in this case, a former paint roller handle extension. The scale didn’t quite fit the originally planned tiki torch insert, but that will likely now be substituted with a sterno can or maybe a brake fluid or transmission fluid can to hold the fuel and wicks.

Warren will take it the rest of the way with the paint and the fuel assembly. I’m going to try to make it over to Lower Sackville on that Monday  (which is also our province’s Heritage Day holiday) and help celebrate Warren’s part in our country’s history. If you make it out yourself, I know you can’t miss this 6’6″ guy in a red olympic track suit, running along with maybe the nicest looking olympic torch you’ve ever seen.