As we begin 2016, we’re excited about some ideas that we have been developing.  Stay tuned for more soon.

The past couple of months have been busy with work away from Chez Craft so haven’t had nearly as much production time as we would have liked.  However, we have had a chance to do some playing and creating.  In addition to some gifts and projects for family and friends, we made several donations for our Atlantic Woodworkers’ Association annual toy drive for the Salvation Army.

Stephen did another one of his amazing toy trucks and 2 sets of tops. Dump truck with two sets of tops in cloth bags. 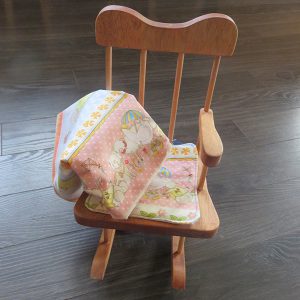 I completed the restoration of my small rocking chair that I described in an earlier post (Mini Restoration).When I had stripped it down, the wood was actually quite lovely so I  finished it with child safe oil.  I also made a cushion and doll blanket as well as a matching pillow case for the child. 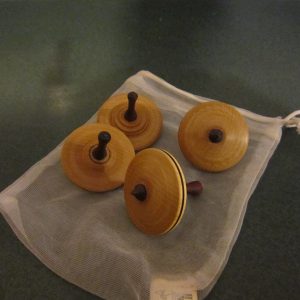 In December, Stephen had quite an assembly line going for toy tops.  He made more than a dozen sets for gifts.  He also wrote up a brief history of tops and some ideas for games.  I made small lined drawstring bags and we packaged two tops with the history and game score cards. 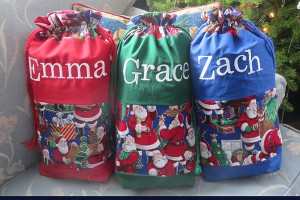 My end-of-the year products included finishing a reversible duvet cover for a friend, and making a number of Santa sacks, including these ones for our grandkids.

That is about it for our year end update. We’re looking forward to a year of creativity, learning, sharing and happiness – and wish the same for you.